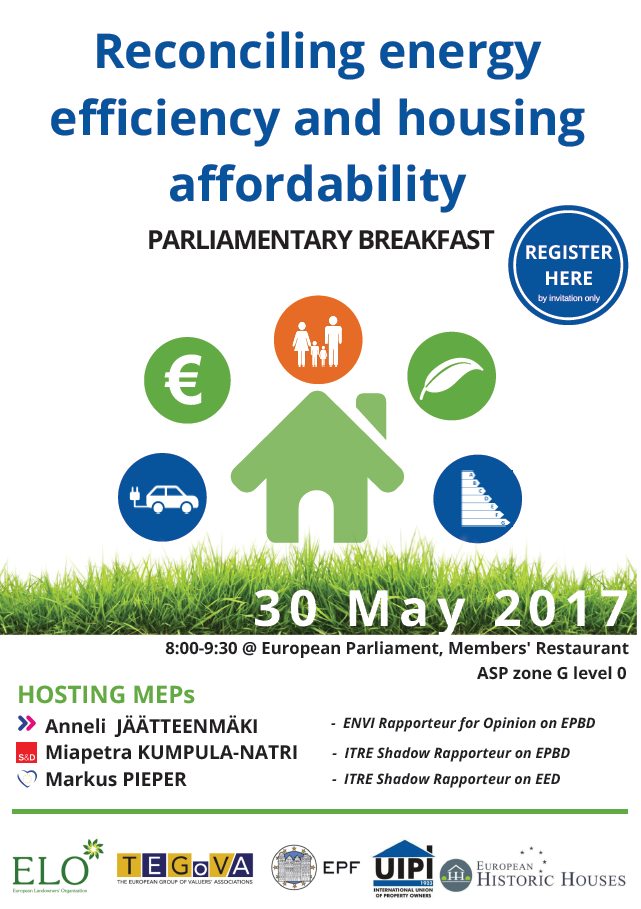 On 30 May 2017, UIPI and four other pan-European associations representing a large part of the private housing and real estate sector in Europe co-organised a Parliamentary Breakfast on “Reconciling energy efficiency and housing affordability” to discuss the Energy Performance of Buildings Directive (EPBD) provisions currently under revision.

Improving the energy performance of buildings has been identified as key to reaching the EU’s long-term energy and climate targets. As part of the Clean Energy Package, the European Commission presented on 30 November 2016 a proposal to amend the EPBD as well as other pieces of legislation impacting European homes. In collaboration with European Historic Houses Association (EHHA), European Landowners’ Organization (ELO), European Property Federation (EPF) and The European Group of Valuers’ Associations (TEGoVA), UIPI aimed at stimulating the dialogue between the European legislators and stakeholders on this topic.

Dr. Kai H. Warnecke, President of Haus & Grund Deutschland and Vice-President of UIPI, said: “Achieving energy efficiency first will only be feasible with the will of the citizens. The only way to gain social acceptance of direct requirements and additional expenses is by striking the right balance of costs and benefits of specific energy efficiency requirements. In this context, legislators should be cautious not to shift the cost of e-mobility from transport to housing.”

Participants welcomed the balanced approach taken in Bendt Bendtsen’s draft European Parliament Report and in the Council discussions. The European Commission acknowledged that property owners have and are already making efforts to improve the energy performance of their buildings.