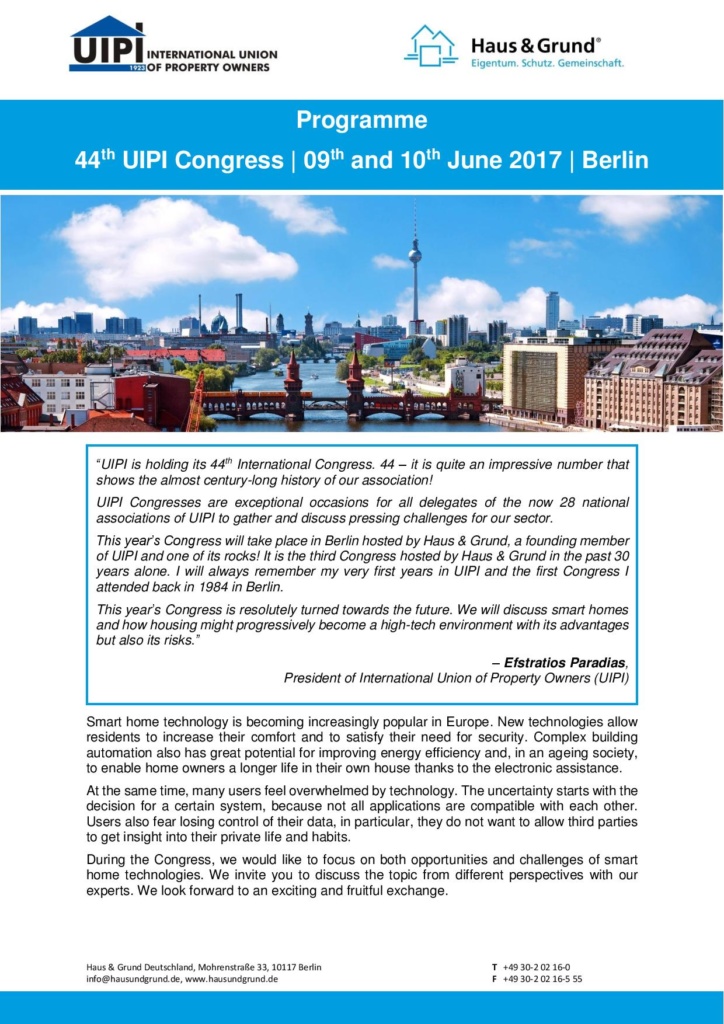 On 9 and 10 June 2016, the International Union of Property Owners (UIPI) organised its 44th bi-annual Congress in Berlin, hosted by Haus und Grund Deutschland, the German association of property owners.

More than one hundred representatives from national and regional associations of property owners in Europe gathered to discuss a subject resolutely turned towards the future: “Smart Homes”, as well as the opportunities and risks related to them.

New technologies are rapidly and radically changing our way of life and work, our access to information and communication. There is hardly any part of our daily life that is not affected. A similar revolution is happening in our homes. These new technologies aim at increasing our security and well-being, they help us to optimise our energy use and live longer in our homes.  At least that is what the consumers expect and those are the promises made to them. But these technologies go hand in hand with a certain number of risks, risks that are not negligible and which must be addressed: How to protect users from possible intrusions into the network? What use is made of the data collected on our lifestyle and consumption? Is the consumer sufficiently informed and protected? What are the real savings and costs of these technologies? These questions have been addressed by the various stakeholders, whether they were representatives of the European legislator, producers of these technologies, users, or data protection specialists. The Congress continued the following day with a site visit to an intelligent house prototype at the Technical University of Berlin, as well as a visit to Berlin’s smart quarters and neighborhoods.

The Vice-President of the European Parliament, Alexander Graf Lambsdorff, who opened the official dinner, stressed the importance of European collaboration and mentioned that Europe is at a crucial moment in its history and that the on-going political changes should help to give a new impetus to European integration.

What do owners of smart buildings think?

Ahead of the Congress, the UIPI also conducted a 6-weeks survey among its members to assess the attitude of homeowners and landlords vis-à-vis these technologies, their willingness to install such devices and at what costs and under which conditions they would do so.

UIPI has received nearly 2500 responses from at least 20 countries in Europe, most of them from owner-occupiers. Among the main findings of this survey, it is interesting to note that almost 40% of respondents already use smart technologies at home or in their rented properties, and that an overwhelming majority would be willing to install one or more of these technologies. However, more than half condition the installation to the cost and purpose of the appliance. If the primary reasons for installing smart technologies (for more than 900 respondents, just under a third of them) is to reduce costs, including energy costs, security appliances are on top of the list of equipment our members would like to install.  It is also interesting to see that nearly 40% are willing to invest close to 1000 € in these technologies, 20% less than 500 € and 20% are willing to go up to 5000 €. Finally, this study shows that a very large majority of owners are, in one way or another, concerned with the protection and security of their data. However, this would not stop most of them from installing smart technologies provided they have adequate safeguards in this area.